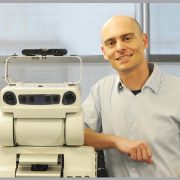 Reinforcement learning and imitation learning have seen success in many domains, including autonomous helicopter flight, Atari, simulated locomotion, Go, robotic manipulation.  However, sample complexity of these methods remains very high. In contrast, humans can pick up new skills far more quickly.  To do so, humans might rely on a better learning algorithm or on a better prior (potentially learned from past experience), and likely on both.  In this talk I will describe some recent work on meta-learning for action, where agents learn the imitation/reinforcement learning algorithms and learn the prior.  This has enabled acquiring new skills from just a single demonstration or just a few trials.  While designed for imitation and RL, our work is more generally applicable and also advanced the state of the art in standard few-shot classification benchmarks such as omniglot and mini-imagenet.

Dr. Pieter Abbeel received a BS/MS in Electrical Engineering from KU Leuven (Belgium) and received his Ph.D. degree in Computer Science from Stanford University in 2008. He joined the faculty at UC Berkeley in Fall 2008, with an appointment in the Department of Electrical Engineering and Computer Sciences. His research focuses on robotics, machine learning and control.
Professor Abbeel has developed apprenticeship learning algorithms which have enabled advanced helicopter aerobatics, including maneuvers such as tic-tocs, chaos and auto-rotation, which only exceptional human pilots can perform. His group has also enabled a robot to reliably pick up randomly shaped, crumpled pieces of laundry and fold them. His work has been featured in many popular press outlets, including BBC, The New York Times, MIT Technology Review, Discovery Channel, SmartPlanet and Wired.