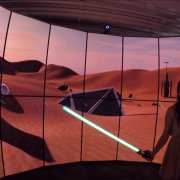 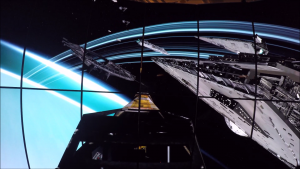 How would a visualization laboratory celebrate Star Wars?

With the highest resolution Star Wars simulation in the world of course!

Graduate EE student Noel Kawano and undergraduate ICS student Ryan Theriot developed a simulation of the epic space battle in Star Wars Rogue One, and a scene on the desert planet of Tatooine.

The simulation was developed for the Destiny-class CyberCANOE at the Laboratory for Advanced Visualization & Applications. The CyberCANOE was co-funded by the National Science Foundation and the Academy for Creative Media System.