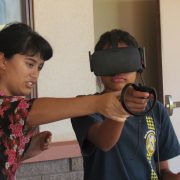 Molokaʻi Math Day took place on April 8, 2017 in conjunction with the Hoʻomau festival at Lanikeha, Hoolehua on Molokaʻi. Molokaʻi Math Day was initiated in 2011 by the department of Mathematics and has become a yearly event since then. On April 8th, two UH faculty, two post-doctoral researchers, three graduate students and seven undergraduate students flew to Molokaʻi to run activities including robotics, toothpick geometry, origami 3D-shapes and probability games.

This year, Kari Noe of the Laboratory for Advanced Visualization and Applications participated with a portable VR station displayed for the first time, it proved to be a resounding success among Molokaʻi’s population with students lining up to dive into their first encounter with the world of virtual reality.

Kari is an undergraduate double major in Information & Computer Science and Academy for Creative Media (ACM). Kari also works as a laboratory research assistant in LAVA funded by ACM System. 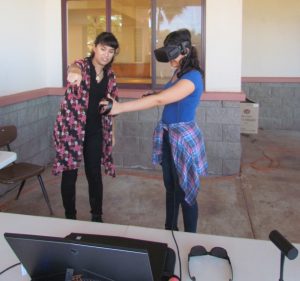 Professor Philip Johnson Talks about the March for Science on ThinkTech...
Scroll to top