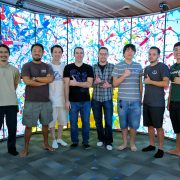 Opening 2017 with a bang, Director of the X-Men series of movies, Bryan Singer, visited the Laboratory for Advanced Visualization and Applications (LAVA) at the invitation of the Academy for Creative Media System founding director, Chris Lee.

During the visit, Mr. Singer had the opportunity to see LAVA’s  Innovator-class CyberCANOE- a tiled ultra-high resolution 3D visualization wall. Mr. Singer commented that “this is some of the best 3D I’ve seen, and I’ve seen a lot!” To which director of LAVA- Jason Leigh, commented, as he pointed at the recently completed Destiny-class CyberCANOE, “No it’s not. This is the best 3D you’ve ever seen.” 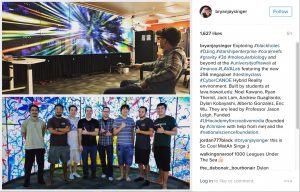