Blog - Latest News
You are here: Home / All / Faculty / LAVA’s Data Visualization class taught between Hilo and Manoa via... 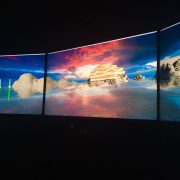 In the Spring 2016 semester, a new system –CyberCANOE– was installed at Imiloa Astronomy Center, the first of its kind in the Big Island. A brainchild of University of Hawai’i-Mānoa Faculty in Computer Science, Jason Leigh, the acronym CyberCANOE stands for Cyber Enabled Collaboration Analysis Navigation and Observation Environment, a display technology that enables users from science to education to the arts, local or distributed, to work together using cool software tools. The CyberCANOE at Imiloa is co-funded by Chris Lee from the Academy for Creative Media System and the National Science Foundation. Imiloa is using this opportunity to teach a class on data visualization between faculty from University of Hawai’i-Mānoa and University of Hawai’i-Hilo, John Burns and Misaki Takabayashi from Marine Science, Jie Cheng and Jason Leigh from Computer Science, and Jon Goebel and Julieta Aguilera from Art and Creative Media.

According to Leigh, this class is changing things around in a way that takes advantage of how Arts are traditionally taught, encouraging students to put their projects out for open criticism to work and problem solve. Cheng adds that Computer Science students have a great opportunity to work on real world data (with Marine Science students) and with Art students that can enable all to discover patterns and tell interesting stories, bridging the gap between scientific research and the public. For Goebel, class projects allow each discipline to contribute their expertise in solving a visualization problem. Being able to see things one does not normally see, is one of the things that Imiloa really does effectively, visuaizing outer space inside the planetarium dome. Scientists are dealing with information, and sometimes they need creative means, and that is where the artists come in. “That’s what we do, we think visually.”

Leigh notes that most problems we have to solve in the world today are not just about the one diagram that gives you the Nobel Prize but a number of different factors, different pictures that have to come together like a jigsaw puzzle. You can think of the CyberCANOE as this giant canvas where you put up pieces of information, and by moving them around next to each other you form the secret hidden inside the data. The CyberCANOEs being built in Hawai’i all have varying capabilities, some of them have stereoscopic 3D or tracking. The sky is the limit as to what you can put in these devices… scans of historical sites become historical preservation, so that centuries from now we can still visit those places even though they might be long gone. And if you are wheelchair bound, you can still go there with technologies like Virtual Reality (VR). Some may consider VR an isolating experience but if done right, it can actually be very rewarding. Imagine putting a 3D camera on the International Space Station, or the Moon, or on Mars. Very few of us will ever have the opportunity to go there, but with VR technology, you can. Burns and the department of Marine Science at UH-Hilo do a lot of 3D modeling and 360 video for reef sites from Hawai’i, for this exact reason, that people can get immersed in a location without having to be there, specially in restricted sites like the Papahānaumokuākea National Monument, where you can can look at data, but also at the physical environment, and bridge that connection, perhaps doing a tour, from the scale of reefs throughout the globe, all the way down to a molecular level, transcending spatial scales and giving people a huge amount of information in a concise product.

Marine Scientists may spend years working on a study that gets brought to the public through a scientific journal, reaching a small community of scientists. For Burns, outreach is a chance to connect with communities, to answer the simple questions: why does it matter if we have healthy coral reefs or not? what does it mean to people? It is an opportunity for students to continue their passion and spread the message on the importance of their work. This class is making presentations that will be exhibited at Imiloa, and if successful, students will get to see how people respond, perhaps help produce better exhibits, and something that was cultivated here between two UH campuses, can reach broader attention. To give the students the opportunity to try and address that with their projects is great, because this kind of environmental issue matters to everyone.

In the past, Aguilera points out, exhibits were developed so there were many people in between scientists and the public, who would summarize messages that people from all disciplines and ages would understand, and when you do that, a lot is lost and what is left may not be a very passionate subject. Research makes content accessible in more exploratory ways. Today it is nearly impossible to create an exhibit at a Museum that will withstand even months without something changing about it, because of new research and data. This class is adding up to that phenomena, as museums are becoming a lot more fluid, where scientists are showing their research as it happens. In the future, Cheng can see the big picture where the CyberCANOE system expands in Hawai’i including disciplines and collaboration between different campuses, introducing data that is unique to Hawai’i, that can be visualized for the world to see, starting at Imiloa.

Gerald Lau is Advisor of the Year!
Scroll to top