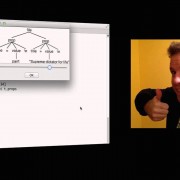 Programmers run into parsing problems all the time, whether it’s a data format like JSON, a network protocol like SMTP, a server configuration file for Apache, or a simple spreadsheet macro language. My goal with ANTLR 4 was to make it as easy as possible to build parsers and the language applications on top. ANTLR will accept all grammars (minor caveat: no indirect left-recursion) and can produce extremely efficient ALL(*), Adaptive LL(*), parsers. In this talk, I’ll give a mini-tutorial on ANTLR 4 and the Intellij plugin.

Bio: Terence Parr is a professor of computer science at the University of San Francisco where he continues to work on his ANTLR parser generator. Until January 2014, Terence was the graduate program director for computer science and was the founding director of the MS in Analytics program. Before entering academia in 2003, he worked in industry and co-founded jGuru.com. Terence herded programmers and implemented the large jGuru developers website, during which time he developed and refined the StringTemplate engine. Terence has consulted for and held various technical positions at companies such as Google, IBM, Lockheed Missiles and Space, NeXT, and Renault Automation. Terence holds a Ph.D. in Computer Engineering from Purdue University.