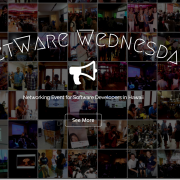 Wetware Wednesday, a monthly high tech networking event hosted by HTDC, will be hosted this month by the ICS Department and Jason Leigh’s LAVA laboratory.

Join us from 6-8pm on March 30 in Keller 102 for light refreshments, conversation, and the following five minute lightning talks by ICS faculty and students:

You can hear more about the event in ByteMarks Cafe Episode 395.