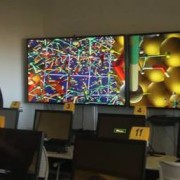 Governor David Ige and the first lady were treated to a 3D graphic display on the UH West Oʻahu CyberCANOE (Collaborative Analytics Navigation and Observation Environment) that is used to carry picture and sound between UH classrooms so students on different campuses may see each other and work together sharing rich media and information.

The CyberCANOE project is led by UH Manoa ICS professor Jason Leigh, of the Laboratory for Advanced Visualization and Applications, and funded by the National Science Foundation and the Academy for Creative Media System. ICS PhD student Dylan Kobayashi and Computer Engineering Master’s student, Noel Kawano delivered the demonstration by connecting the CyberCANOE in West Oahu to the ones in UH Manoa and UH Hilo’s ʻImiloa Astronomy Center.

The demonstration of the CyberCANOE was part of a tour of the UH West Oahu campus to get to know the university’s creative media program, ʻUluʻulu moving image archive and forensic anthropology program.

Addition details of the visit can be found here.