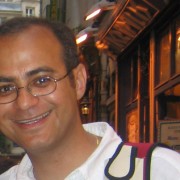 Our reliance on data for making decisions, or data analytics, is undergoing a transformation from being predominantly carried out by a single individual or a group of experts, and in limited settings (such as on traditional PCs) to taking place while on-the-go and in the field of action. Data analytics is becoming necessary for the general end-user. For example, an athlete may consult their network of body-worn sensors to gauge their training performance, a shopper may need to quickly consult web sites of competing products as well as their personal finances before making a purchase, or a parent may track information about their child’s performance, over time, in school. Common among all these scenarios is the growing need for advanced tools that will enable end-users to interact with vast and diverse amounts of data for sense-making, while on-the-go. However current tools and devices, such as smartphones and head-worn displays, are not tailored to enable the need for interacting with large or diverse data sets.

In this talk I will present on-going work in ubiquitous analytics, that focuses on the development of end-user software interface technologies for meeting data analytic needs in varied, ad-hoc mobile environments. Such tools will facilitate the advanced exploration and interaction with data, ‘anytime’ and ‘anywhere’, through improved information navigation, visualization and manipulation interfaces on potentially information-rich portals such as mobile and wearable devices. I will present recent examples from work in our lab on Ubiquitous Analytics, and open a discussion of potential projects that fall under this umbrella of research activity.

BIO: Pourang Irani is a Professor in the Department of Computer Science at the University of Manitoba and Canada Research Chair in Ubiquitous Analytics. His research is in the areas of Human-Computer Interaction and Information Visualization. More specifically, his work concentrates on designing and studying novel interaction methods and systems for giving end-users efficient access to various information structures (maps, spatio-temporal data and video) on a variety of computing devices (smartphones, wearable devices and large shared surfaces). This has placed his research at the core of Ubiquitous Analytics, a field he is pioneering, and which concerns the development of interactive and visualization tools for exploring information “anywhere” and “anytime”.

HiCHI in the news: How Does Social Media Affect Our Political Decisions?
Scroll to top