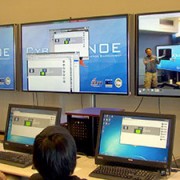 UH Mānoa student Andrew Guagliardo is interested in a career in animation and says the opportunity to learn video game development in a collaborative environment is exciting. “It’s really awesome the way it’s set up, because you have the programmers working with the artists,” he said. “If I want to collaborate with people on the mainland, I’m basically learning how to do that through this class.”

The dual-campus class is made possible by a new tool at each site called the CyberCANOE, which stands for the Cyber-enabled Collaboration, Analysis, Navigation and Observation Environment.

The CyberCANOE is a visualization and collaboration infrastructure that allows students and researchers to work together more effectively using large amounts of data and information. It was created by Hawaiʻi Innovation Initiative hire Jason Leigh, who is also the founder and director of the Laboratory for Advanced Visualization and Applications (LAVA), and funded by the Academy for Creative Media (ACM). Leigh is teaching the class jointly with UH West Oʻahu Assistant Professor Josiah Lebowitz.

Leigh is the inventor of the CAVE2 virtual environment at the University of Illinois at Chicago. CAVE2 consists of a 2-D and 3-D 320-degree panoramic, virtual reality environment made up of 72 flat screen LCD panels, 20 speakers and 36 high-speed computers. UH’s CyberCANOEs are the next generation of this virtual environment.

Space for Mānoa’s first CyberCANOE was provided by the campus’ Information Technology Center while UH West Oʻahu’s CyberCANOE is located in the ACM Computer Lab in the UH West Oʻahu Library. Funding for both CyberCANOEs, a total of almost $100,000, came from the University of Hawaiʻi System’s Academy for Creative Media.

ACM Director Chris Lee said, “ACM was always designed as an industry catalyst and you can’t have an industry unless you are creating the workforce.”

However, there is much more to UH’s CyberCANOEs than video game development.

According to Leigh, multi-screened computer environments can be used for any class that needs the screen space for data-intensive research in almost any discipline, from astronomy to oceanography.

“Whether it’s video games, planning a new city or going to outer space, the idea behind the CyberCANOE is to use data visualization to allow people to be more creative, solve more challenging problems and come to better solutions with greater confidence,” Leigh said.

Leigh is building a larger CyberCANOE at UH Mānoa, and it will be made available to researchers and students in various disciplines at all 10 University of Hawaiʻi campuses. He hopes to have it up and running by the end of 2015. He also has a grant proposal in to build an even bigger third CyberCANOE at the campus. More exciting voyages lie ahead for UH and its CyberCANOEs.

Nostalgia just became a law of nature
Scroll to top