Blog - Latest News
You are here: Home / All / Events / Seminar: Shumin Zhai, Google, “Where will the next HCI breakthrough... 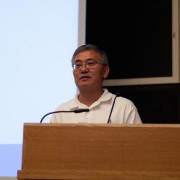 Breakthroughs and progress in HCI can come from radical innovations, foundational research in understanding and modeling user behavior, or technology evolution in both software and hardware. It is difficult to predict which kind of work is more productive at a given time. Using text input that my colleagues and I have focused on as an example, I will informally review a few projects of all three kinds, and raise challenges and opportunities ahead.
Shumin Zhai is Senior Staff Research Scientist at Google where he leads both current and longer term research efforts in advancing the state of the art of text input. Prior to 2011 he worked at IBM Research with his colleagues on user interaction performance modeling, input device design and evaluation, novel interaction modalities such as eye-tracking,  and interaction method inventions such as word-gesture keyboard. He is Editor-in-Chief of ACM Transactions on Computer Human Interaction, Member of the CHI academy, and Fellow of ACM.
POST 127, Thursday, October 9, 4:30pm
http://dev.ics.hawaii.edu/wp-content/uploads/2014/10/shumin-zhai.jpg 404 502 Philip Johnson https://www.ics.hawaii.edu/wp-content/uploads/2014/11/icslogo3-300x66.png Philip Johnson2014-10-03 02:30:002016-01-11 21:01:14Seminar: Shumin Zhai, Google, "Where will the next HCI breakthrough come from?"