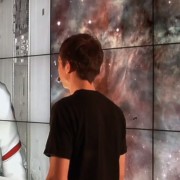 The University of Hawaiʻi at Mānoa’s Laboratory for Advanced Visualization and Applications (LAVA), and the University of Illinois at Chicago’s Electronic Visualization Laboratory (EVL) have received a $300,000 award from the National Science Foundation to conduct initial research to enable the automated translation of natural language into scientific visualizations.
In the popular movie, Iron Man, Tony Stark creates his technological innovations with the help of Jarvis, an intelligent voice-activated computer assistant. In 2007 Jason Leigh (formerly director of EVL and now director of LAVA) began development of the system called Articulate to enable humans to simply speak with a computer to ask questions about their data, and have the computer automatically generate visualizations that answer their queries. The first prototype of Articulate was demonstrated in 2010, and in Spring of 2014 the project was awarded funding by the National Science Foundation’s EAGER program to investigate how to expand the approach to support scientific visualizations (Award# IIS 1445796). For more information visit: lava.hawaii.edu.
http://dev.ics.hawaii.edu/wp-content/uploads/2014/09/PastedGraphic-2.jpg 494 1097 Henri Casanova https://www.ics.hawaii.edu/wp-content/uploads/2014/11/icslogo3-300x66.png Henri Casanova2014-09-19 21:56:472014-11-15 01:54:34LAVA partners on $300K NSF grant for scientific visualization