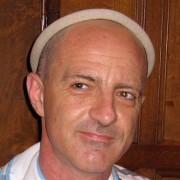 The ICS Department is delighted to announce that Dusko Pavlovic, currently Professor of Information Security at the University of London, will be joining our faculty in Fall, 2013.

Dusko Pavlovic was born in Sarajevo, studied mathematics at Utrecht, and was a postdoc at McGill, before starting an academic career in computer science at Imperial College and at Sussex. He left academia from 1999 to 2009 to work in software research at the Kestrel Institute in Palo Alto. He was a Visiting Professor at Oxford University from 2008-2012, a part-time Professor of Security at University of Twente starting in 2010, and a Professor of Information Security at the Information Security Group at Royal Holloway, University of London in 2011.

Through the years, Dusko’s publications covered a wide area of research interests, from mathematics (graphs, categories) through theoretical computer science (semantics, symbolic computation) and software engineering (behavioral specifications, adaptation), to security (protocols, trust, physical security) and network computation (information extraction). Dusko’s past publications and the slides of some of his recent talks are available from his web page.